The Story of North City Water District – Chapter 8 of 10

What began as a decade of relative peace and prosperity ended with a terrorist attack that changed the world as we knew it. Although water services were not affected, the event prompted increasing discussions about how to ensure adequate and ongoing water service during emergencies—from conservation measures during droughts, to back-up systems amidst natural disasters.

During the winter of 1991-1992, Seattle Public Utilities (who distributes our source water) did what it had always done… released water from its overflowing reservoirs in preparation for heavy springtime rains.

Spring came early that year, with minimal rainfall. Then summer arrived with far higher than average temperatures (and still no notable rainfall), causing record low flows in the Cedar River (our primary water source back then). The result was one of the worst droughts on record for our region. 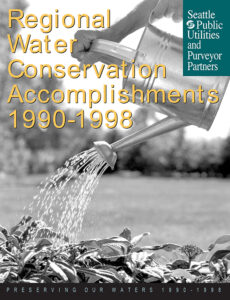 Mandatory water restrictions were enacted, and every water utility in the region began communicating creative water conservation tips. When all lawn watering was banned, it initially caused a lot of complaints, particularly from residents who had been averaging 150 gallons of water each day for irrigation alone.

But soon “people started figuring out the laws of surviving drought,” said Ralph Naess, SPU’s former director of watershed education, in this article. Namely, “A: You don’t need the water. B: You don’t have to pay for the water. And C: Everyone else has a brown lawn too.”

In fact customer response was so dramatic, water usage dropped to a level none of us ever anticipated. What started as a trend soon became the new normal, with a new water conservation mindset that has continued to this day.

The ripple effects of customers using water so much more efficiently impacted every aspect of water operations. We responded by making adjustments to everything from water system and capital improvement planning, to storage capacity and system components.

One of the water resiliency tasks we identified during our Water System Planning was a need for more emergency water sources. In 1993, the District took advantage of a new low interest loan program called the Public Works Trust Fund (formed in 1985) and applied for several loans to address these and other adjustments that would help our system adapt to the new water conservation-related impacts. 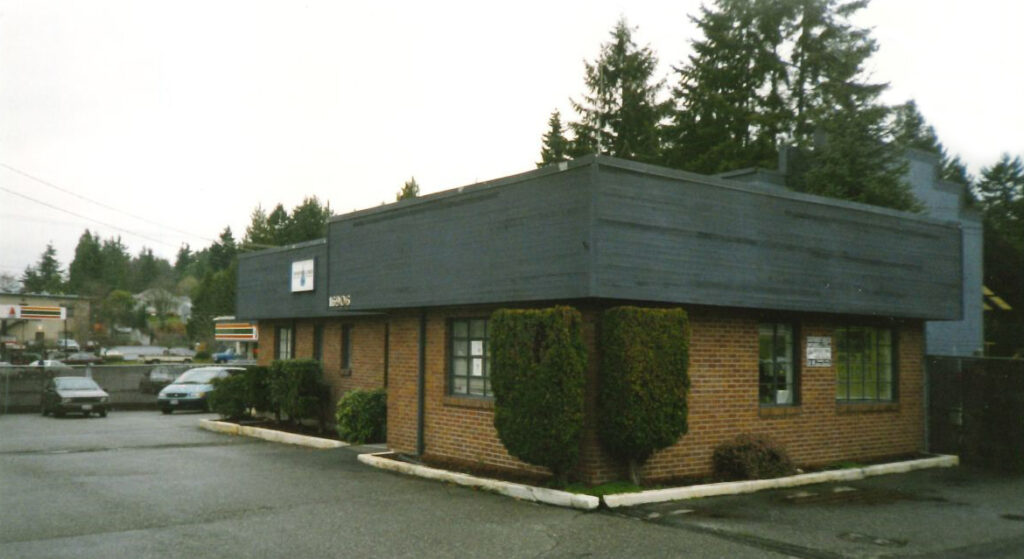 Our District was not alone in these endeavors: as the conservation mindset continued, multiple water purveyors in the East King County Regional Water Association (EKCRWA), of which the District was a member, began investigating and considering alternatives for long-term water supply.

Research included confirming service area boundaries of all water purveyors along the northern and eastern portion of King County, identifying supply requirements including a regional water supply program and a satellite system management program, as well as minimum design standards, review procedures, and financing to enable everyone in our region to have a steady and ongoing source of water. 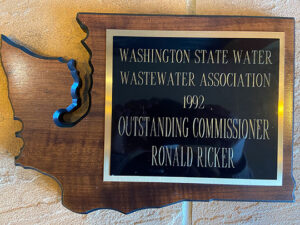 Similar discussions were underway at the Washington State Water and Wastewater Association, where our Commissioner Ron Ricker’s leadership and involvement during this critical time period earned him an award from the Association in 1992.

Remodeling the former Key Bank location on 177th allowed us to move crowded administrative functions into this newer, larger space, circa 1997

Capital Improvements during the Nineties

The District made a number of capital improvements and infrastructure upgrades during this decade, including: 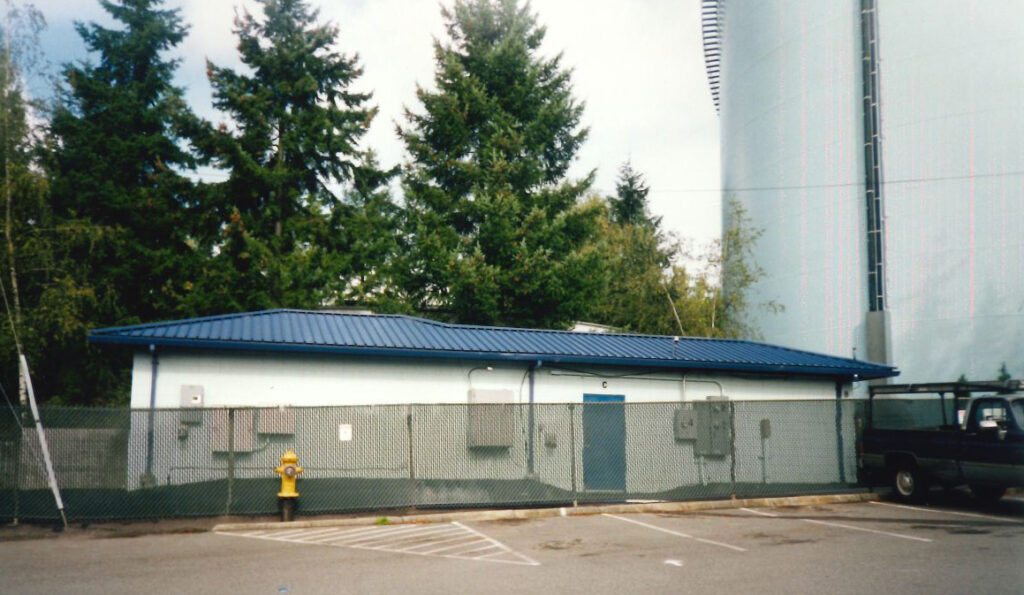 In 1994, the District and City of Seattle signed the “First Amendment to the Water Purveyor Contract,” which required a series of decisions by each utility to determine whether the wholesale water supply arrangement with Seattle would continue.

In order to explore every option, the District began investigating alternative water sources, including the possibility of obtaining water from Lake Washington.

We conducted a detailed review of the regulatory requirements for finished water quality from Lake Washington, spent two years monitoring its water to evaluate both regulated and unregulated water parameters that might affect its ability to be adequately treated, developed several alternative process schematics based on the results of our water quality monitoring, and identified recommendations to refine the list of treatment options that could enable us to source water from Lake Washington. 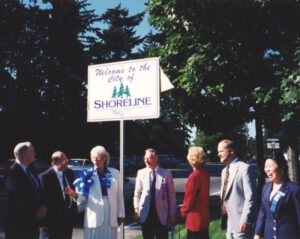 Less than five years after our name change to Shoreline Water District, a new city called Shoreline was officially incorporated, with boundaries west of and including about half of our service area.

Water service for this newly formed city continued to be provided by Seattle Public Utilities (SPU) west of I-5; the service area expanded when SPU built out the water system and took over the Richmond Beach Water Company.

Not long after Shoreline incorporated, they began assessing the District a franchise fee of 6% on water revenues, which afforded us more streamlined permitting processes as well as ongoing use of the city’s public “right-of-way” space.

The need for emergency water sources identified in 1992 and funded in 1993 was at last completed in 1996, with the construction of two emergency interties between the District and the City of Mountlake Terrace. This would allow the exchange of water between both water purveyors during droughts or other emergency conditions.

In 1997, we entered into an interlocal agreement with Shoreline School District to jointly purchase property from the Department of Natural Resources. The District’s portion of the property would allow for the co-location of the District Administrative and Maintenance Staff, as well as space for a water treatment facility, should Lake Washington prove to be an ideal water source. 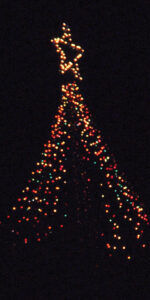 Christmas “tree” lit up on top of our 3.7 MG reservoir

Upon completion of the extensive investigation to determine whether Lake Washington was a viable water source, we concluded that the effort was not something that could be taken on by only one utility in the region, so on November 5, 2001, the District signed a new 60-year “Full Requirements Contract” with the City of Seattle for the Supply of Water, replacing the previous contract in 1981.

Also in 1997, we began a new neighborhood tradition in the form of a brightly lit “Christmas tree” atop our 3.7 MG reservoir. Neighbors came from all around the North City area (and the new nearby City of Shoreline) to enjoy this special moment when hundreds of colorful lights brightened the night sky—complete with live music, donated refreshments, and a special visit from the Jolly Old Elf himself. 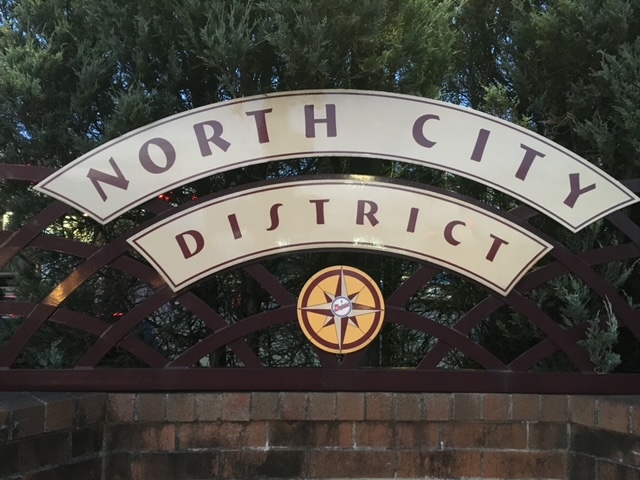 Our next blog post will cover the decade from 2002 through 2011 (to view previous decades, click here). Sincere thanks to Victoria Stiles and Kenneth Doutt of the Shoreline Historical Museum for sharing photos with us.