The Story of North City Water District – Chapter 9 of 10

Thanks to our customers’ ongoing commitment to water conservation, we were able to accommodate an increasing number of new water connections throughout this decade, as our region began shifting towards more multi-family dwellings.

Another positive note at the start of this decade was the arrival of a new Commissioner: Charlotte Haines, a life-long Shoreline resident who was (and continues to be) deeply involved in our community. Her passion for service and involvement across many aspects of our community was an invaluable addition to our Board (for which we continue to be grateful to this day).

However, what this decade may have been most known for was the number of analyses and studies the District conducted. Given the rapid development underway in North City, we recognized the need for proactive water system planning that was both comprehensive yet flexible to accommodate our evolving service area.

A Decade of Strategic Analysis and Planning

We began with a comprehensive evaluation of Seattle Public Utilities (SPU)’s water service area, to assess whether consolidation to become a larger scale operation would make good operational and financial sense, and provide better local representation for our customers. Our study came to a close when the City of Shoreline decided they wanted to venture into the utility business, and began exploring ways they could purchase SPU’s system instead. 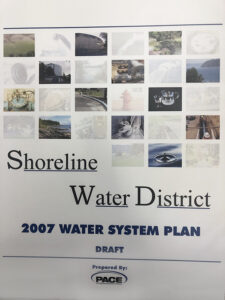 We then made a complete overhaul of our water system mapping and data management using more precise Geographic Information System (GIS) mapping. This provided us with extremely accurate, scaleable maps for visualizing environmental information and specific location data, all of which enabled us to manage our system better, both routinely and in an emergency.

Soon after, the District began developing a new Water System Plan, a comprehensive effort required every six years (it has since changed to every 10 years). The Plan incorporated everything from the findings of the SPU study, and King County’s Countywide Planning Policies, to hydraulic modeling, operational updates, and capital improvements identified during the GIS mapping, including reconfigured pressure zones. 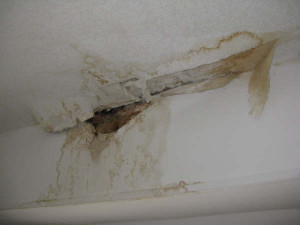 Another item identified in the Plan was the status of our current facilities. Within ten years of moving our administrative functions into the old Key Bank building on NE 177th Street, a small roof leak developed in the lobby, which later expanded to the printer room, and during a particularly bad rainstorm, caused a whole section of the ceiling to give way.

Given the age of our old Maintenance facility, and the increasing problems with our Administrative building, we conducted a Needs Study in 2009 to determine how and where we might be able to house both our maintenance and administrative functions in one facility.

Options included the purchase of several parcels adjacent to the current Maintenance Facility, where we could potentially expand to accommodate both functions on the same site, or finding an alternate parcel that would be large enough to shared with other local governments doing similar functions. 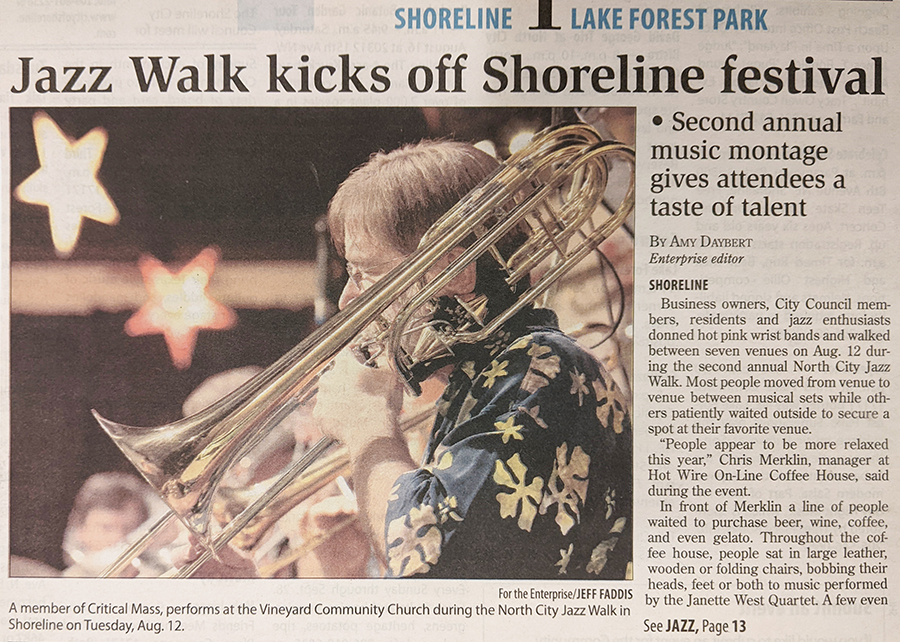 Amidst all of our hard work and studies, we still found ways to enjoy and engage with our community. In 2007, a group of local residents and musicians got together to create a music-lover’s event in the heart of North City, just one block away from our Admin building, giving birth to the first annual North City Jazz Walk. The District was (and continues to be) a sponsor of this event from its very first year.

That same year, our North City hearts beamed with pride when a bronze statue named “Parade Route” was installed near us, at the intersection of 15th Avenue Northeast and Northeast 177th Street. Yes, that’s our own Charlotte Haines behind the large scissors in the newspaper article above… and just to the right of the wrapped statue is Patricia Hale, who was then a member of the City of Shoreline’s Parks, Recreation and Cultural Services Board, and would eventually become one of North City Water District’s Commissioners.

Our first float at the Celebrate Shoreline parade in 2010

Perhaps that “Parade Route” statue became the inspiration for our crew to start participating in the Celebrate Shoreline parade… in 2010, District staff created their very own float for the parade, thanks to Sky Nursery’s ample supply of flowers. The following year, our 2011 float (shown below) took the People’s Choice award! 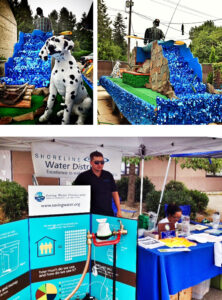 Our community involvement began including educational booths at other neighborhood fairs and festivals in both Shoreline and Lake Forest Park, where we would meet our neighbors, answer questions about water service, and provide conservation information. However our most popular appearance continued to be the annual Holiday Celebration, held on the night that we lit up the “tree” on top of our 3.7 MG reservoir—complete with live music, caroling, refreshments, and visits from the Jolly Old Elf himself (our Commissioners are known for wearing many ‘hats.’) 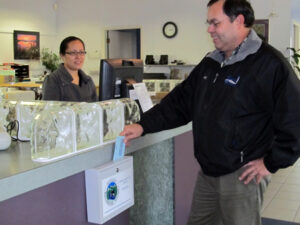 In 2011, the District entered into a partnership with (the former) Ronald Wastewater District to provide “one stop convenience” to customers of both utilities, by setting up payment drop boxes at each location.

In an effort to ensure our water system remained as resilient and reliable as possible during emergency situations, we continued our proactive planning by updating our Vulnerability Assessment Report, our Hazard Assessment Report, and our overall Emergency Response Plan.

Finally, just four years after having developed our 2007 Water System Plan, we closed out this decade by starting yet another comprehensive update to the Water System Plan—two years sooner than required—in order to address the latest round of proposed new growth in North City. Keeping our water system well planned and maintained was and continues to be what we’re all about!

Capital Improvements During the Early 2000s

The District made the following capital improvements and infrastructure upgrades during this decade:

Our next blog post will cover the final and most recent decade of our history—from 2012 through 2021 (to view previous decades, click here). Sincere thanks to Victoria Stiles and Kenneth Doutt of the Shoreline Historical Museum for all of their kind assistance throughout this effort!