The Story of North City Water District – Chapter 6 of 10

As we entered the 1970s—with soaring inflation, long gas station lines, the Watergate scandal, the first Mars landing, and a nation struggling with equality and the ongoing Vietnam war—growth within our District was undergoing a similar surge.

One of our first system improvements during this decade was the installation of a computer telemetry system, which enabled us to closely monitor the water use and quality across every corner of our service area.

Not long after, the City of Seattle initiated a demand metering program for wholesale customers (including our District) to “rectify the regional impacts during peak demand periods” (summer).

In order to avoid having to pass the full measure of these costs along to our ratepayers, we decided to construct additional water storage components to “level out” the demand, thus ensuring a uniform rate of supply from the Seattle system and avoiding costly demand charge penalties.

We began by removing our old 50 thousand gallon reservoir and the 1 million gallon (MG) reservoir (both pictured above), which made room for a new 3.7 MG reservoir, and a Booster Pump Station that would maintain the water pressure in our higher elevation service areas during times of reservoir drawdown. We then adjusted our pressure zone boundaries to ensure uniform water pressure across all service areas. 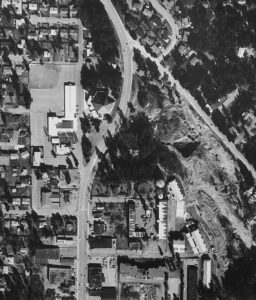 Site of the proposed 3.7 MG reservoir photographed on March 4, 1974

Thankfully our crews were having to handle far fewer water main repairs, as most of our steel water mains were replaced with cast iron / ductile iron piping, along with new water mains to meet the increased development.

At the close of this decade, as our service area approached 8,000 connections and a population of nearly 20,000, we signed a thirty year Water Purveyor Contract with the City of Seattle to maintain our source water supply agreement.

Our next blog post will cover the decade from 1982 through 1991 (to view previous decades, click here). Sincere thanks to Victoria Stiles and Kenneth Doutt of the Shoreline Historical Museum for their generosity and time in sharing so many fascinating details (and photos!) with us.