The Story of North City Water District – Chapter 10 of 10

Looking back across the past nine decades, through unprecedented growth, changes, and events that none of us could have ever anticipated, we are proud to report we’re doing better than ever, and are well positioned for the next nine decades!

Starting the Decade with an Additional Source Water Connection

This most recent chapter in our history began with the addition of a second source water supply line, which would provide a readily available back-up and increased reliability in the event of emergencies.

In the late 2000s, King County began construction of the Brightwater Treatment Facility. Because its associated conveyance system (tunnels and pipes that carry wastewater to and from the treatment plant) was being constructed in the same underground area as the Tolt Pipeline—which at the time was our sole connection to source water—the District became concerned over the potential impact to our water source, should Brightwater’s conveyance system fail.

In response, the District entered into an agreement with Seattle Public Utilities (SPU) to connect to a second source supply from the Cedar River.  The agreement, known as the Northwest Subregional System, consists of three utilities (SPU, Olympic View Water and Sewer District, and North City Water District), all of whom share in the capital and maintenance cost of the subregional system in Shoreline.

From 2012 on, we began sourcing water from both the Cedar River and Tolt River Watersheds, via Seattle Public Utilities.

That same year, in keeping with our customer’s ongoing dedication to water conservation, we took Seattle Public Utilities’ annual “Fix a Leak Week” campaign a step further by creating our own contest, tailored to public and private school-age kids (grades K through 6) within Shoreline and Lake Forest Park. Rules were simple: kids brought home our “Fix a Leak Week” contest flyer, conducted a toilet dye strip test under parental supervision, and prizes were awarded to both the school as well as the classroom with the highest participation.

For eight years in a row, this program not only helped raise awareness about water conservation among the younger generation, and demonstrated how they could make a difference in their own home, it saved a number of local households from high water bills due to previously undetected leaky toilets!

In 2013, we began hosting the first of many free Savvy Gardener classes to share practical advice on creating and maintaining beautiful, healthy landscapes that conserved water and respected the environment—as part of our involvement in Seattle Public Utilities’ Saving Water Partnership. 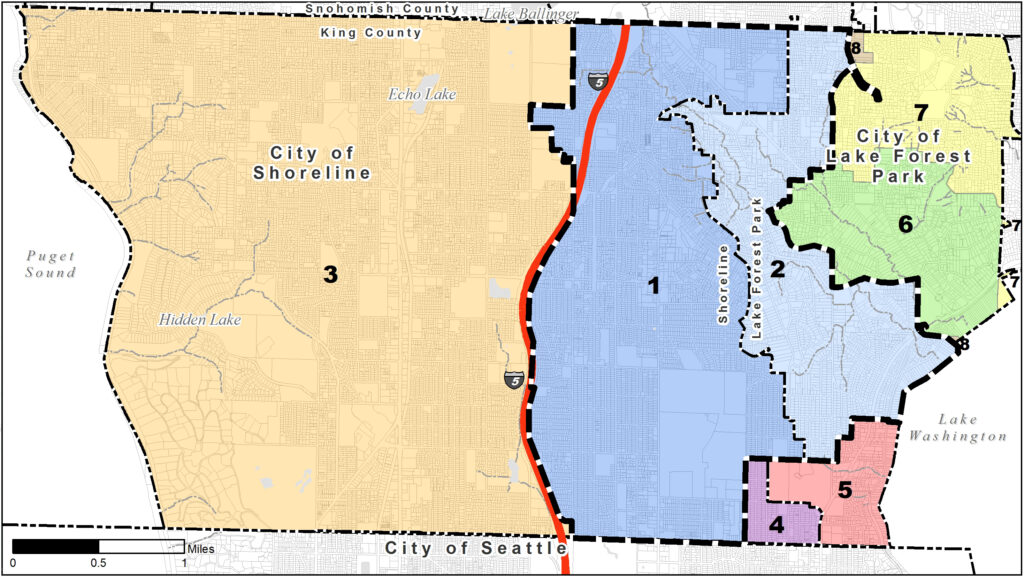 In August 2012, the District and the City of Shoreline signed our second consecutive Franchise Agreement extending through December 31, 2027.

A year earlier, the City of Shoreline announced their intention to purchase the water service that was being provided by Seattle Public Utilities in the area generally west of I-5, and also stated their intention to assume our District’s service area at the end of our Franchise Agreement.

The commissioners and staff of North City Water District immediately issued a public correction, stating our intent to “explore and discuss future water service options,” rather than agreeing to an assumption, based on our strong belief that single purpose governing of public utilities (e.g., a “Special Purpose District” like ours) is a more focused, responsive, and cost effective service approach than government-managed, general purpose utilities.

Unlike utilities managed by cities, a Special Purpose District does not have to address a myriad of government services, balance the budget for conflicting priorities, nor can we divert utility taxes to pay for other general fund issues such as animal control, transportation, land use planning, or budget deficits. Everything we do, every day of the year, is solely focused on your water system.

Three years later, the City decided SPU’s asking price for the water system was beyond their budget, and the plans were shelved.

Changing our Name To Reduce Confusion

When two entirely separate entities are known by a similar name, confusion naturally arises. This fact became very apparent to the District in the comments we received, both during and after the City of Shoreline’s Proposition 1.

Countless customers told us they voted yes on Proposition 1 because they thought we were the entity that intended to take over Seattle Public Utilities’ water system.

After much deliberation and a variety of name considerations, our Board of Commissioners voted to change our name to North City Water District, to clarify our role as a Special Purpose District operating independently from the City of Shoreline and serving customers outside of that City. 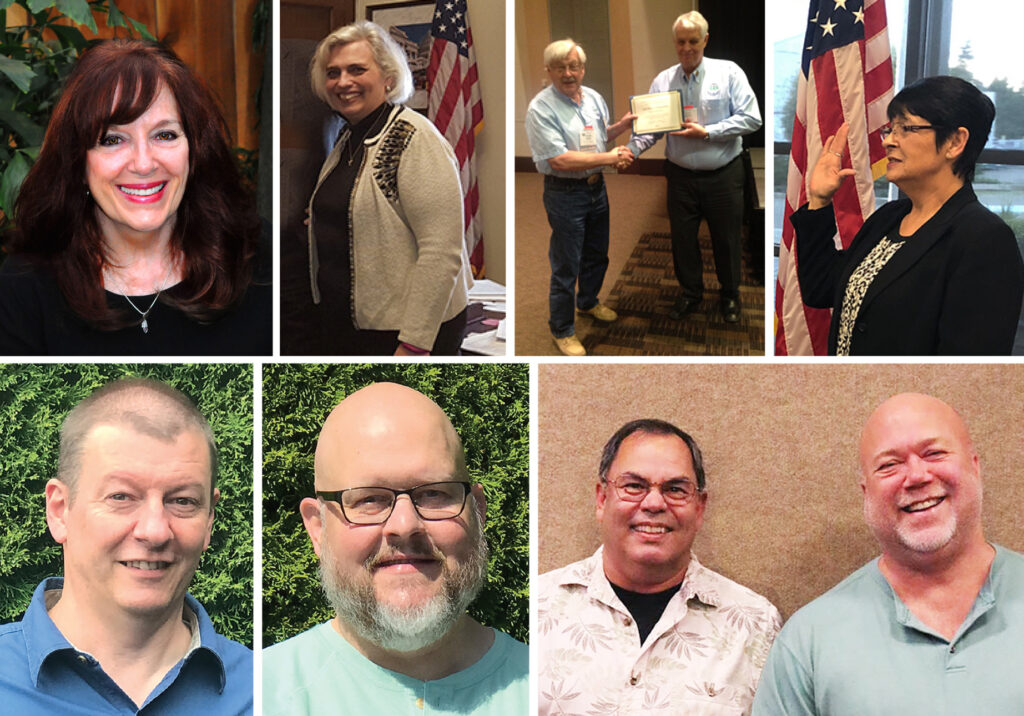 A Decade of Personnel Growth

This decade saw a number of honors and achievements from our personnel: 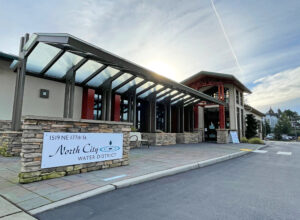 2012 also marked the onset of construction for our Administrative Office building. Our original intent of simply fixing what was broken and adding a little more space was put to the test when inspectors not only recommended a full roof replacement, but also a simultaneous upgrade of multiple mechanical, electrical and energy issues while the roof was off.

Unfortunately, the cost of these repairs compared to the value of the building triggered mandatory code upgrades from the City of Shoreline—including the requirement to move our building 18 feet closer to 177th Street—which forced us to re-do the entire building footprint.

During demolition, we discovered the remaining walls were not structurally sound, and the foundation did not contain enough rebar to meet current codes. For all of these reasons, the project that began as a simple repair / remodel grew into something more significant.

Fortunately, remaining at our current location had several benefits: convenience and access were excellent, parking was already ample, the original bank building’s drive-up window could continue to serve the public, and a large backup generator system was already in place to keep operations functional during power outages and emergencies.

When construction was finally finished in the summer of 2013, the expanded and upgraded Administrative Office building was adequate for both existing and future operations, with an efficient building envelope that would last for decades, complete with a large Board Room available for community and non-profit organization meetings.This decade saw the culmination of three noteworthy projects, all of them after years (and sometimes even decades) of planning: a new Pump Station in North City, a new Administrative Office building, and a new Maintenance Facility. 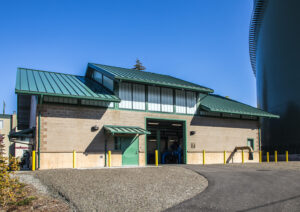 Design for the new Pump Station, located adjacent to our large 3.7 million gallon (MG) reservoir in North City, began in 2012. During this same year, the District applied for and successfully received a 1% loan through Washington State’s Drinking Water State Revolving Fund to fund the Pump Station’s construction and related improvements.

The new Pump Station replaced equipment that had served beyond its life cycle, provided service to the newly expanded 615 pressure zone in the Ridgecrest neighborhood, and addressed system deficiencies within the existing Pump Station.

In honor of our Operations Manager’s many decades of service to the District, the facility was officially named the North City / Denny Clouse Pump Station upon its completion in late 2017. 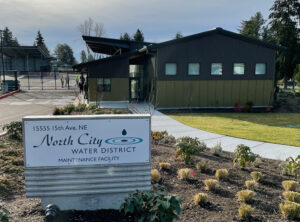 After more than 30 years of planning, site searching, and creative responses to setbacks, we finally found an affordable site that could accommodate everything we needed in one location, and began the design process for our new Maintenance Facility.

Building and site demolition were completed in August 2018, site preparation was finished in early 2019, with construction bids in hand from three local companies shortly after. However Seattle’s intense construction climate gave us a turn: all three bids came in much higher than expected, and more expensive than we could afford.

Our Board of Commissioners instructed staff to go back to the drawing board—either to reduce the project scope, or to find creative ways to phase the scope over multiple years—in order to achieve the facility we needed, within a reasonable budget and timeframe.

Our “repackaged” project featured a reduced scope that phased portions of the project over a longer schedule, however it resulted in only one bid. Yet that contractor’s creative approach—allowing us to choose which aspects of the project were most critical, while still remaining within our budget—enabled us to construct our new Maintenance Facility and take occupancy by the end of 2020.

The following year we initiated the next phase: construction of two additional outside covered bays for equipment that didn’t need to be heated, but would last longer under cover.  COVID supply chain issues caused additional delays, but these new bays were finally completed in the summer of 2022.

Over the long term, the District will continue to explore additional opportunities on this same site, including another concrete reservoir, and/or a booster pump station, once funding becomes more readily available. 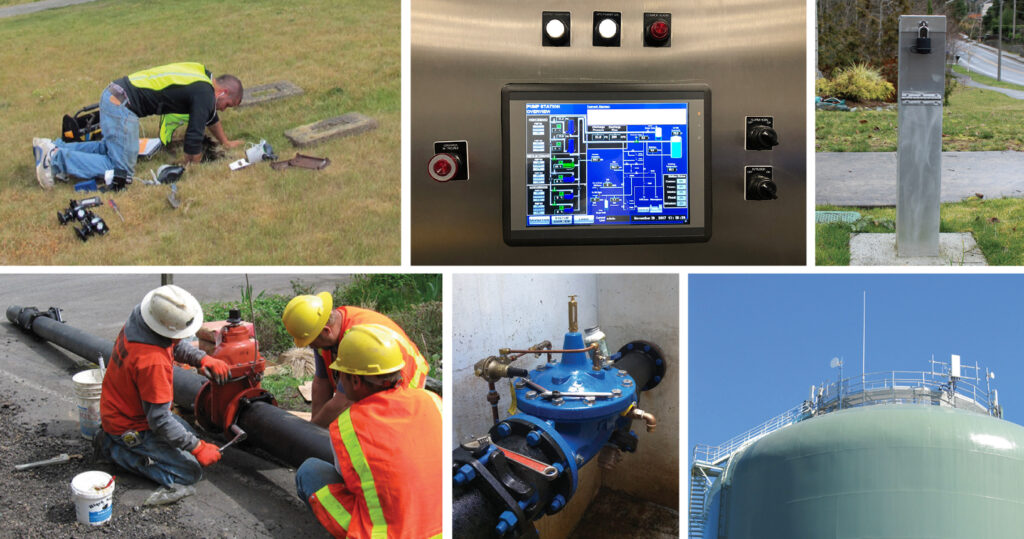 Additional Capital Improvements During this Decade—2012 to 2021

The District made the following capital improvements and infrastructure upgrades during this most recent decade:

When the unprecedented impacts of COVID-19 began affecting both our ratepayers as well as our staff in early 2020, we approached the challenge as creatively and thoughtfully as possible. This included waiving all late fees and shut-offs due to delinquencies; developing financial assistance programs; making operational changes to ensure safety amid ongoing operations; and implementing various cost-cutting measures to avoid rate increases.

Unlike some utilities who suspended routine maintenance and regular reinvestments to capital during COVID, we continued to keep our proactive approach to both—ensuring staff were appropriately masked, distanced, and tested when necessary to ensure the health and safety of everyone.

While COVID may have tested our operations, we are proud that our procedures, training, experience, and proactive approach to operations and financing enabled us to ensure all of our customers and local businesses had good clean water.

We believe our ability to continue without interruption during COVID was yet another reflection of the uniquely proactive philosophy that has been our hallmark since our founding more than 90 years ago—guided by Commissioners who reside within our service area, are elected by local residents, and provide the local control that ensures an outstanding water system.

Even though each year brings new regulations, materials, technologies, and an ever-growing customer base (currently over 27,000 population), all of which requires more staff, training, equipment and vehicles to manage these ever-evolving operations, the common denominator has always been our sincere dedication to bringing you the best water possible, 365 days a year.

We have truly enjoyed sharing our history with you, and hope it has given you a first-hand look into the level of foresight, planning, and dedication that has gone into making your special purpose water utility one of the best in the nation. To review the full breadth of our history, decade by decade, click here. A final round of thanks to Victoria Stiles and Kenneth Doutt of the Shoreline Historical Museum for their invaluable assistance throughout this effort!